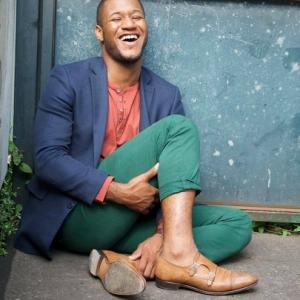 I'm an actor and writer from Paris, France.

THE VOW - Synopsis : Devastated after unsuccessfully defending a victim of police brutality, Attorney Steinler runs over the police officer he attempted to prove guilty.

Plus, I'm very excited and honored to announce that my pilot script MANHOOD (comedy-drama)about bisexuality is nominated in the category best Pilot script at the 4th Web series festival global in Hollywood.

MANHOOD - Synopsis : After revealing his bisexuality leads to breaking up with his long term girlfriend Carmen, Gabriel also loses his job. The corky black man then decides to grab his destiny with both hands and explores head on his bisexuality. The single life doesn't seem to last long as he falls for the sexy Adam. All of this becomes a little more complicated when Gabriel's father, Joe, who abandoned him and his mother Rose 25 years ago, comes knocking on his door with alzheimer's disease.

After coming out as a bisexual at 29, Gabriel, a single and broke black man finds himself forced to share his flat with his charming but douchy father which abandoned him 25 years ago and is now diagnosed with Alzheimer.