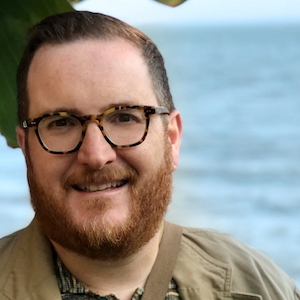 Vinny Lopez is a a 2019 WGA “Made in NY” Fellow, a two-time Sundance Screenwriters Lab finalist with his scripts City and La Puta, and his short story Biography was published in the literary journal Unstuck. His pilot script The Great Leader was a semi-finalist at the Austin Film Festival, and his comedy pilot Out of Fashion was picked up by Propagate Content and pitched to the heads of development at Apple, Amazon, Lifetime, E! and Bravo. He also created a digital series about nine semi-sane gay brothers entitled Two Jasperjohns, which was featured in Vulture, Splitsider, and the New York TV Festival, and is currently making an ongoing animated Instagram series entitled Sam and Al and the World—when his reminders app isn’t nagging him to find an agent for his debut novel I Am a City, a sometimes hilarious, often harrowing tale of San Francisco, southern girls and mind control. He currently works as a Creative Director at Comedy Central. You can see more of his work at vintronix.com.