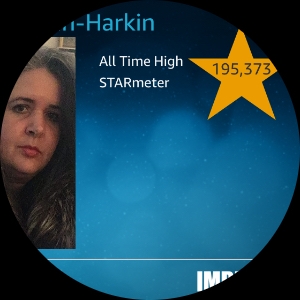 I have just registered Lightning Bolt Films Limited (London) as a means to executive produce / co produce my movies (which I am a bit in love with) I have been published as an International Journalist, a photographer/photojournalist, poet (I did not write the poetry in Dante and Lizzie which is original), written short stories a book and another screenplay. I have also worked in Marketing and studied Drama and Theatre Studies at school. I am a lone parent of a mixed race child who is at boarding school and also acts sometimes. I am a multipotentialite and also disabled with MS and apparently live among ghosts and thieves.

I would like to co / executive produce given the opportunity and funds. I also have ideas for a lot of the casting and have approached or am approaching those I see in some roles.

I have ideas for sets and music also and Directors (I can't help it, I'm a see the big picture thinker) he Vanishing Point is my second screenplay and I'm working on the first draft to The Vampyre - the prequel to Dante and Lizzie and a spin off tv series (I already have ideas for about 30 episodes these would ideally use some of the same sets and actors as in Dante and Lizzie and The Vampyre and the idea is to continue and develop some storylines from these). There is some cross over between my ideal cast for different movies so it might be possible to have two or even three + crews with different directors but swapping Directors and some actors between some locations while leaving some crews in place to film scenes for a couple of the movies and the tv series to lessen the impact of company moves etc. I also have plans for a potential Shakespeare adaptation involving a couple of the ideal actors which I am awaiting news on. And potential spin off Marketing ad Film ideas.

I have outlined the basics for 30 episodes but I would ideally envisage working with other writers on these and executive producing. I think it makes more sense to do Dante and Lizzie, the prequel and shoot some footage for the tv series concurrently as some involve the same sets and characters that I have written about in the feature films. I may do a third feature and make it a trilogy. I have Marketing ideas and have also been a Marketing Consultant and Manager. See career history on linked in. I now have also got an outline of a linked computer game idea, or potentially a series of character-driven multiplayer games.

I could probably do a tv spin off to the vanishing point also but Dante and Lizzie and the prequel have me hooked at the moment with visions of glorious scenery and beautiful sets and film stars, also I have a shakespearean play to adapt if I get funding. This I also want to film and stream ideally.

For more on the ideas not yet on line - the prequel The Vampyre is a draft but I'm not fussy re formatting and would gladly go to production on and all these scripts potentially concurrently on the understanding it is in development and I have MS and there will be errors - please do get in touch.

My website is victoria luckie.com and my email and contacts are on IMDBPro, new website for Lightning Bolt coming soon. I can't wait to get started on these projects which ideally involve some of my favourite actors and gorgeous cinematography - also if you want to recommend me to agents or managers please do so. I'm keen to work with seasoned professionals with expertise I don't yet have. I am estranged from most family and aware of libel directed at me.

THE VAMPYRE - A PREQUEL TO DANTE AND LIZZIE

When a young, creative and idealistic Doctor of modest means sees a job advertisement to escort a wealthy aristocrat on a Grand Tour he must battle his past, his present, his culture, and come face to face with it’s forgotten terrors. A prequel feature film to Dante and Lizzie and before Spin off Highgate (TV pilot, game idea and possible third feature). (Have 3-5 series of ideas for episodes of tv series and a computer game outlined.) Looking for coproduction.

Fed up with persistent indignities, the elderly residents of a nursing home in the Cotswolds decide to invent the first Direct taxi service to heaven. Based on a short story by the same author.

A mysterious family of handsome Italian dissidents with unnatural artistic talents arrive in London in the 19th century, quickly becoming part of the arts scene. But one writes a frightening tale, and strange tales about members of the family begin to surface.