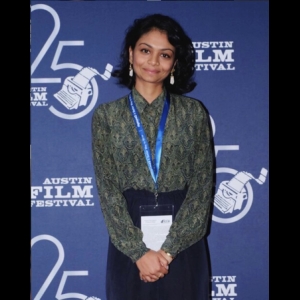 Urvashi Pathania grew up in India, where she was a cheeky, fun-loving kid, but at age 9, her family moved to New Jersey. Suddenly, Urvashi was the weird girl with a thick accent and thick unibrow, and everyone told her she should be good at math. This was strange because she’d never cared about numbers, but she ran with it, and after attending Columbia, ended up an Investment Banker (who had also secretly majored in Film Studies). When the cognitive dissonance became untenable, she quit her job and decided that instead of crossing picket lines, she’d rather write actors’ lines. In 2020, she graduated with an MFA in film from USC.

Luckily, Urvashi controls her own narrative now. She wrote and directed a short film that premiered on HBO Max (Unmothered, TRT: 15min). She also spent the last year as a Google Storytelling Fellow in partnership with the Black List and wrote a pilot for Lena Waithe’s Mentorship Program. She is currently repped at Echo Lake.

After two Indian American sisters face a slew of rejections due to their dark skin, they enlist the help of their plastic surgeon aunt to achieve "perfect beauty."