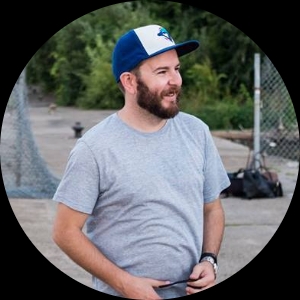 Tyler is a writer and filmmaker living in Peterborough, Ontario. His passion for entertaining came early on from the backyards and parking lots of cottage country Canada – filming skateboard videos with friends and performing wrestling “shows” with the local kids. After finding sobriety in his mid-20s, Tyler went on to graduate with honours from Sheridan College’s esteemed Advanced Television and Film program. Though primarily a comedy writer, Tyler has a flair for dramatic storytelling – touching on themes of mental health, grief, and addiction through the lens of small-town Canada. Since Sheridan, he has optioned his web series “Bluebird” for television development with Don Ferguson Productions, and directed the award-winning short “The Talk”, that was a finalist in Kevin Harts “Eat My Shorts” competition at Just For Laughs 42. Lately, he has been working as a Production Coordinator for both indie and major studio features and series, learning the logistical side of the film industry. He also has a poodle named Daisy that he can't shut up about.