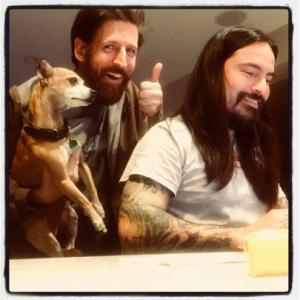 Screenwriter. Storyteller. Script Doc. Lots of praise, lots of interest, a few dollars but nothing of note produced yet. Let's change that shall we? My writing partner Patrick Guera has reinvigorated my writing these days. We're an unstoppable team. Give us a read and an opportunity.

5 FREAKS IN A VAN

A ragtag group of misfits with special powers escape from a black-ops military facility where they've been created as weapons and held captive. They steal an old van and go on the run with the military on their trail. In their travels they wind up helping people in need and growing into a makeshift family. Kick Ass fun of 80s action flicks meets the humor & heart of Guardians of the Galaxy.

What if humanity's biggest threat was its greatest hope? Meet Cain Barrett.. Cain has dedicated his life to educating and empowering the most disadvantaged and poverty- stricken people in the world. He's spent billions trying to end hunger, famine, and disease... Yet, people think he's the Antichrist.It doesn't help that he's an outspoken Atheist who calls religion "the unacknowledged plague" -or that he is the only suspect in the murder of a priest.Who is Cain? Is he the Antichrist or is he humanity's savior? Is he a wealthy philanthropist trying to move humanity forward or a madman with a grudge against religion? Is he the devil, an immortal god, a monster? Or is he just a paranoid and eccentric billionaire strung-out on experimental drugs and losing his grip on reality?The only thing certain is that Cain has some monumental secrets and there's no shortage of people that want to destroy him.