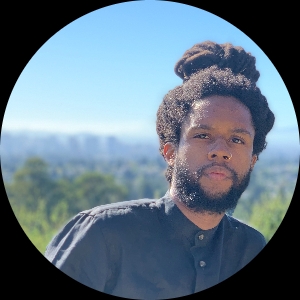 chimakara Djhuty is a storyteller from Upper Marlboro, MD currently living in Inglewood, CA. He has Ambitionz As A Writah, which manifests through songs, scripts and stand-up. In 2018 he won the Insecure on Set Contest which afforded him the opportunity to work on all aspects of production of the hit HBO show, Insecure. That same year, he was able to guest star in the Insecure season 3 finale. He maintained relationships with cast and crew which led to him becoming a writer’s assistant for Ben Cory Jones in 2019, and landing the role of production coordinator of Amanda Seales’ Smart Funny and Black show for February of 2020. That same year, he packaged, pitched and successfully sold The Mecca, an HBCU-based comedy TV series. Unfortunately, the series was sold to Quibi, and all of us in the industry knows what happened to them. He’s since been paying it forward by consulting other writers on packaging and pitching their shows, as well as writing new pilots of his own with the hope of becoming staffed on a show.