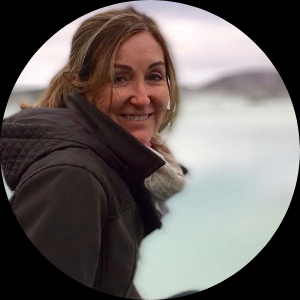 Like J.K. Simmons in the Farmers Insurance commercials, Teresa “knows a thing or two because she’s seen a thing or two.” Born in Scotland and raised in New Jersey, Teresa zigzagged all across the country in eighteen moves with her husband, a 2-Star Coast Guard Admiral and their four children. She’s got a great sense of humor - has to - (did we mention four kids?), a black belt in Taekwondo, worked in Micronesia for a CDC Epidemiologist, stumbled across still-live WWII bombs in the Saipanese jungle, entertained top brass and heads of foreign governments and lived to tell (write) the tales.

Because she was fully supporting her husband’s military career, Hollywood had to wait, but the writing wouldn’t. So, she filled those years with newspaper and magazine writing, (TIME, the San Francisco Chronicle, Army/Navy/Air Force Times, to name a few) as well as award-winning plays at the Eugene O’Neill Theater in Connecticut and comedy sketches off-Broadway.

The day her husband left active duty was the day Teresa was accepted into the prestigious UCLA Master of Screenwriting program. She aced the challenge with a record number of productions including the University’s first streaming drama pilot, Doubleblind, which she created and co-wrote and for which she won a Samuel Goldwyn Award. She was a contributing writer to the anthology, Heyday of the Insensitive Bastards (Netflix) produced by James Franco’s Elysium Bandini Studios. She has two produced shorts, Lucky Day and Claws, the latter which she both wrote and directed.

Teresa has optioned her original comedy feature, Stewardess, but with three sons and a husband all in the military, she’s really good at writing “guy” stuff, which accounts for her recent Coast Guard-themed drama pilot, Sector LA as well as her baseball/Vietnam war story feature adaptation, The Dodger. Her stage play, The Beatle Club recently completed a critically acclaimed run (Oct, 2021) in the D.C./VA. area with the Providence Players.

Teresa is a member of the Writers Guild West