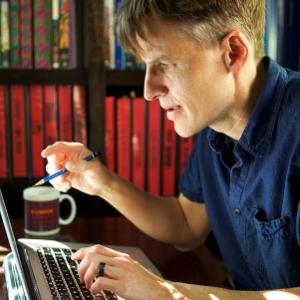 Steve is a screenwriter from Boston, a wicked cool place. His screenplays have become Austin Film Fest 2nd Rounders and NICHOLL FELLOWSHIP QUARTER-FINALISTS. His screenplay CANARY IN A COAL MINE (available on this website) was a NICHOLL SEMI-FINALIST. Steve's scripts have been showcased on John August’s SCRIPTNOTES podcast and Pilar Alessandra’s ON THE PAGE podcast, which featured Steve as a guest. He has pitched to Sony, Syfy, Disney and DreamWorks.

Steve is also a graphic designer and filmmaker. He directed a live performance of his screenplay, CLAUS v HOLLYWOOD, at the D.C. Shorts Film Festival. That same script won him and his co-writer free use of a professional sound stage wherein they shot a film currently in post-production.