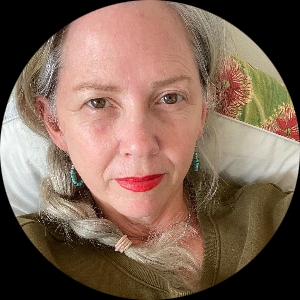 Shauna Ray Ratapu is a 50-something California Kiwi - which is to say, she was born in California, married a Māori fella from New Zealand whom she met on a blind date, then lived there for 17 years. Quitting her job as a high school Drama and English teacher in order to pursue her dream of owning a Black Box theater company, Shauna became co-writer/Director and Editor of several plays and short films. Now the mother of three grown-ass kids, she and her Kiwi fella have returned to California where she is giving her biggest dream of being a screenwriter a good old Kiwi try!

A middle-aged mother trying to suppress her wild, fearless childhood persona must confront her childhood trauma involving her unstable parents that makes her irrationally paranoid about potential dangers facing her children and family.