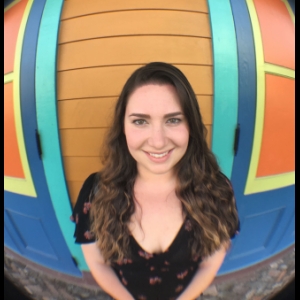 Sarah Mickelson is a comedy writer who hails from the avocado capital of the world (Fallbrook, CA). She recently wrapped on the second season of Liz Meriwether’s BLESS THIS MESS, her episode "Bunker Down" premiered this past February. Sarah’s gender-flipping, thriller feature spec, SLASH HER, was selected for the 2019 Hit List. Montecito Picture Company is attached to produce. Sarah is currently working on Mindy Kaling's new series COLLEGE GIRLS for HBO Max and previously was the Writers’ Assistant/Script Coordinator on SNEAKY PETE for Amazon. Sarah’s writing has been featured on The Hit List 2019, The Bitch List 2019, in the 2019 ATX TV Festival Pitch Competition, and in the Orchard Project Episodic Lab 2020. The greatest compliment she can ever receive is that she’s nothing like her parents, which is why she gravitates towards stories about identity, outsiders, and dysfunctional families. Sarah has a knack for turning gender stereotypes on their heads and a talent for creating female characters that can find the funny in the bleakest of situations. She is currently working on an original pilot, SWEET 'N LOW, about a woman whose life begins to unravel when she discovers her father is a Sugar Daddy (based on a true story - ask her about it sometime).

When a 16-year-old girl inadvertently becomes the sex sensei at her prudish high school, it gets harder to keep her biggest secret: she's actually a virgin.