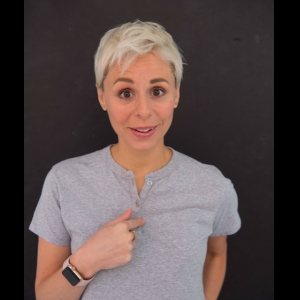 Sarah Mack is a writer/actress known for her dark sense of humor and unusual whit. She first wrote and produced a song parody called ‘Are Your Parents Proud of You?’, that led to the funding of her web series ‘It’s Fine’ (on Amazon). She has since written and produced comedic short, ‘Blind Sighted’, and online mini series, ‘Quaranteens’ (featured on Whohaha). Sarah’s original songs have been performed at fundraisers for the Fundamental Theatre Project and at Symphony Space, songs performed by sock puppets explaining complex themes to children, themes like divorce and rape. Sarah’s dark comedy screenplay, ‘Home’, was a semi-finalist in the ScreenCraft pilot competition in 2020 and honorable mention in the Female Voices Rock festival. Sarah is an avid hiker and backpacker and plans to be eaten by a bear someday but until then she strives to tell stories. Stories that all different shapes of people can feel in their guts and laugh at ‘til it hurts. www.SarahMack.net

After calling her patient a ‘twat’, a burned-out first year therapist turns to the best-kept secret of the psychology world… summer camp… but when this idyllic retreat turns out to be more fucked up than a frat party at Planned Parenthood, she’s left with two options: give up, or take over.