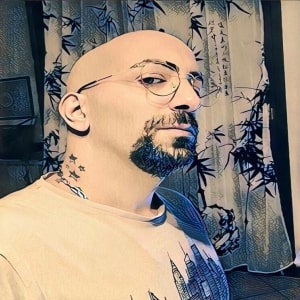 Born in Rome (Italy) on the 26 of July 1984, Sami Abdel Ghani studied as an Accountant, cultivating his passion for writing. In 2006 he wrote the book ASSASSIN. He is currently working on screenwriting, and on March 2020 has released his first screenplay, titled "Too Much Love Will Kill You". He's passionate about cinema loving Quentin Tarantino's films, regarding the style of writing and directing, which he's inspired by. He loves the Noir Movie World, and has the conviction that a Movie without a clear and deep message is not a Movie, but only a simple product to sell, equivalent to a Bic Mac.

TOO MUCH LOVE WILL KILL YOU

Shot on the floor, Philadelphia Police Captain Carl Frikmaan asks to his 9 years old son Andrew for revenge. He tells him that it was John White who shot him, and to don’t kill him, but to make him suffer all his life. Andrew has always been surrounded by love from his father, mother and sister. He grows solely with this thought of revenge. 13 years later he comes back from a 3 years Marines training to Philadelphia. His sister is 16 now, but already terribly charming. She continues to share that accomplice sisterly love with Andrew acting like a good sweet girl with a transgressive soul. Andrew often meets Richard, an old childhood friend of his father. He’s still upset from Carl's death and won't help him stop. Andrew is hired at the police, and discover that the new captain is the person he’s looking for. He's always torn between his good lovely side and the revenge he has craved since he was a child. Nothing stops him. He electrocute White's pregnant wife in the bathroom, watching her dying from inside the closet, place where he spies on her for one of day. He unleashes his anger by seducing and violently fucking several women as the story unfolds. During White's wife's funeral, he finds out that White still has an elderly mother alive, who lives in Pittsburgh. After finding some clues, even though he has a constant doubts that he’s doing wrong, he goes to Pittsburgh and kills White's mother by dropping a huge tank of water on her, that was going to the rescue of one of his little sheep prepared by him under the tank that was there bleeding with the tendons of the paws cut. Andrew finally finds inner peace. Few months later, Sarah confesses that she’s engaged and pregnant with a man known on the internet. With her boyfriend she exchanged little information, to prove that the most important thing is to be in love with a person, beyond the name, surname or job. Andrew finds out that this mysterious boyfriend is John White. The night when at home he's about to follow and finally terminate his revenge plan by killing his sister too, he discovers that it was his mother who killed his father, because of the father's secret bisexual relationship with White. Andrew runs away from the house in a panic. The following early morning he commits suicide throwing himself down from a skyscraper, to save his sister and mother from his anger of revenge.