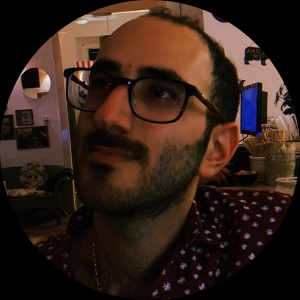 Rusteen Honardoost is an Iranian American comedy writer, and he currently works as the writers assistant and script coordinator for the Peabody and Emmy-award winning Apple TV+ series Stillwater.

His live-action comedy pilot "Ramona" scored an 8 on TheBlacklist.com, was a finalist for the ATX-Blacklist Writing Program and was called “dark and frank and funny” by writer/director Jason Reitman, which was very nice of him to say.

He was also a finalist for Adi Shankar’s Cure for Apu Screenwriting Competition in which he was able to turn a lifetime of people asking him how to pronounce his name into a spec script for The Simpsons satirizing the character Apu’s place in popular culture.