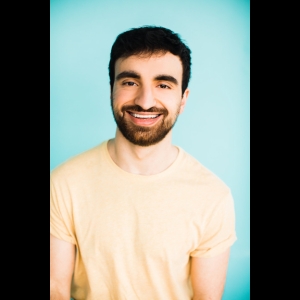 Rob Michaels is an Iraqi-Canadian writer, actor, director, and content creator based in Toronto.

He recently worked as a story editor for a network show premiering in 2021, and has placed in the Austin Film Festival and ScreenCraft Pilot Launch for his writing. He is a graduate of Second City’s Sketch Conservatory Program and an alumnus of their Bob Curry Diversity Fellowship. He recently performed in the pre-show for Second City’s Family Company and as a swing in Second City’s Educational Company. His sketch comedy channel, Wishful Genies, has been screened in numerous festivals and accumulated millions of views online via features on Funny Or Die and 9GAG.

Rob’s greatest accomplishment is completing a math degree and a business degree simultaneously, then choosing a career that requires neither. In his free time, Rob likes to travel the world and listen to Disney songs on repeat.

When a recent graduate lands a job as an investment banker, he’s immediately disillusioned by the finance industry due to his obnoxious coworkers. Thus begins his journey to step away from the path his Middle Eastern parents put him on and trade his life for a better one.