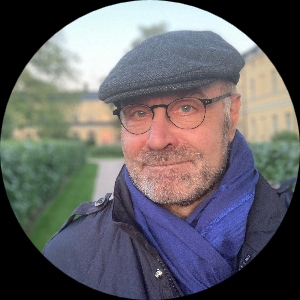 Risto has had complex career in media and film business. The screenplay "Dead Ants" is loosely based on his Finnish language novel Kuolleet muurahaiset, that was first published in 2015. He has written few hundred newspaper and magazine articles, four books in Finnish and in English three screenplays The Iraqi Friend, Dead Ants and My Guide to the Penguin Problem, and a stage play Looking For Asylum.

The Iraqi Friend was optioned by YLE [The Finnish Broadcasting Co] and raised interest in London, but has not yet been made intoa film.

Risto's latest book [Huijarit taidemaailmassa cowritten witha former art squad detective Jyrki Seppälä] about con artists in the art world has just been launched in Russian with excellent start. The Finnish Film Foundation has awarded him three times grants to write feature films. He has taken different roles in making and developing documentary films. Today he is best known as a writer & journalist but he started his career as a cameraman making TV shows & drama, commercials and corporate videos, and making his own short films [producing, acting, editing and directing]. He made his first animation film when he was 12.

After the big 1990s financial crises in Finland, he moved to London and became a freelance journalist and a writer to much of his own surprise. In London he also worked as an editor in chief for a 52 -part magazine series about WWII for an English publisher. Later he also worked in Brussels and Dublin. Over the years as an investigative journalist he has gained in depth knowledge from variety of subjects such as business of fake art, corruption in soccer, human trafficking, DRC Congo and Northern Ireland. Today he works and lives in Helsinki, and has an office in old mental hospital.

As intolerance spreads across the nation, in the north religious fanaticism gains new ground and in the south racism spreads. Detective Samuel S finds himself investigating an assault and hate mail cases, that feels boringly trivial. Meanwhile a teacher, Emma L, whom Samuel has briefly met, falls into depression and seeks help from a prominent psychiatrist. When Emma starts receiving hate mail, she gets furious and goes to see the detective and later starts dating with him. Emma becomes obsessed to find out, what secrets lie behind photographs that are hanging on the walls of her psychiatrist’s surgery. Samuel doesn’t take her investigation seriously until it is almost too late.