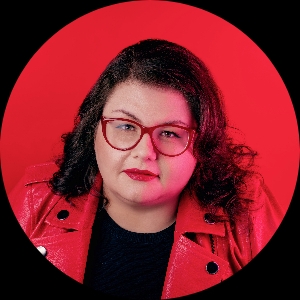 Rachel Brethauer is an accomplished writer, professor, and escapee of the advertising and big tech worlds. She's won multiple awards for her writing, including a Film Outside the Frame award for Best Original Pilot, four PROMO! Awards, and three Canadian Marketing Awards. She has also been in the top 6% of NBC's Writers on the Verge and a semi-finalist for the CineStory TV competition, the Sundance Episodic, and Fox Writers Labs.

Armed with a degree in Radio and Television Arts from Ryerson University and previous careers in both ad copywriting and tech writing, Rachel earned an MFA in Writing and Producing for Television at Loyola Marymount University in 2014 and soon after began teaching screenwriting to undergraduate students, followed soon after by Television History and Media & Cultural Studies courses, also at LMU.

An American Zealot, the award-winning film she co-wrote as part of her Film Independent/LMU Incubator Lab fellowship was featured in many film festivals both stateside and abroad. It's now available on your favorite VOD service. You can watch the trailer here: https://vimeo.com/187361552

Rachel hates how boring and uptight this bio makes her sound and is usually the first person to let an accidental f-bomb slip. Obsessed with both research and the way stories set in the twentieth century reverberate with themes on our lips, hearts, and minds today, particularly as they apply to women's stories, Rachel currently makes her writing home in 20th century period dramas.

A human IMDb, staunch feminist, proud Canadian, U.S. immigrant, whiskey-loving hater of onions, Rachel would be an asset to any room.

HOW I BECAME A MAN

When a cruise ship doctor is fired after romancing passengers, he reluctantly shuffles toward adulthood by helping his nephew prepare for his bar mitzvah and unexpectedly reconnecting with his childhood best friend who’s just learned she’s pregnant.

DON'T FORGET ME WHEN I'M GONE

After her mom dies and her dad skips town, a woman with no marketable skills returns to her hometown to raise her teenage sister and falls into a job as one of the first VJs in Canadian music television, raising eyebrows and her boss’s blood pressure.

Newly divorced Barbara Sherman moves her daughters to Los Angeles to kickstart her career as a singer-songwriter. Once settled in their Laurel Canyon neighborhood amid rock royalty, they find themselves falling down the rabbit hole of the early ‘70s L.A. music scene.