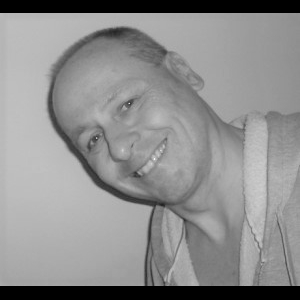 I was born and raised in Nottingham, England.

When people think of Nottingham they usually think of Robin Hood and Maid Marian in Sherwood Forest fighting against the evil Sheriff of Nottingham. And that's pretty much how it is. I live in a tree house in Sherwood Forest and write my scripts when not robbing the rich to give to the poor. No I don't wear green tights. Far to chilly at night for that.

I have stories for films which I am turning into scripts, and I'm going to turn them all loose.

Watching movies and reading scripts have been my film school.

I’ve no connections to the film industry, other than watching movies.

The run around with the agencies got as far as having one of my scripts compared to “Se7en” before being advised that they are not interested in such material.

I’ve registered my scripts with the WGA and I've found that the Black List evaluations have been a great help.

Living Nightmare = Imagine the characters in “Scarface” invading the world of “James Bond.” Conspiracies collide in a script set in England and Africa. I uploaded this one to this site and had some evaluations during the last two years. I've edited and rewrote it etc and uploaded it again in late June 2020.

Helvoria’s Monsters = It has the thrills of an “Indiana Jones” movie mixed with the chills of the classic monster movies from the Universal and Hammer studios. Helvoria is beyond science, beyond witchcraft. Helvoria truly is deadlier than any male, and her monsters have vampire fangs and werewolf claws.

Please keep in mind that I am British so I generally use the English spellings of words.