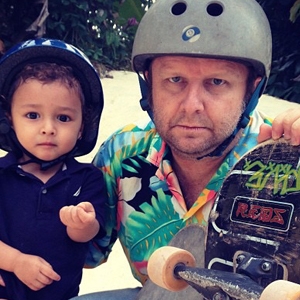 I was born in 1964 on a small island named Daru, off the south coast of Papua New Guinea.

I moved to Perth, Western Australia, as an eight-year-old, where I was raised on a goat farm and attended very working-class schools.

My teenage years were spent chasing surf, skateboarding and playing music. As an adult, I designed surfing wetsuits and clothes, played music, built an eco-resort in the Cambodian jungle and made films.

I won a number of awards during my ‘film student’ years, then set up a small post-production facility. I thought I lacked life-experience to make really great films, so decided I should wait until I was 50 years old to make my first feature film.

After 12 years of small-time production, playing music and teaching media, I returned to continue my studies, and achieved 1st Class Honours with a short documentary set in Meulaboh, Aceh, after the 2004 Boxing Day Tsunami that killed 300,000 people. Meulaboh was the closest town to the epicentre of the earthquake that caused the tsunami. An Other Voice from Aceh explored the ways film can be used during recovery from trauma. I used the film to raise money for bikes, to help kids get to school, and returned on the second anniversary of the tsunami with 270 bikes.

Another 10 years passed, and I began my PhD while living in the Cambodian jungle, where I had built and run an eco-resort with my wife. My PhD explored representations of Cambodian masculinity, and I used filmmaking processes as a research methodology. My main submission was a feature film called, Bngvel, which I finished editing the week I turned 50.

Though I've had many 'careers', one thing has stuck with me; the love of telling stories through film.

Having spent some years living and working in South East Asia, I am very interested in the ways Asian and Western cultures intersect, and am currently working on scripts that explore that intersection.

When an Aussie ex-rocker’s wife passes away, he risks losing his only daughter forever when he travels to Bangkok to revisit a dream he gave up on 30 years ago.