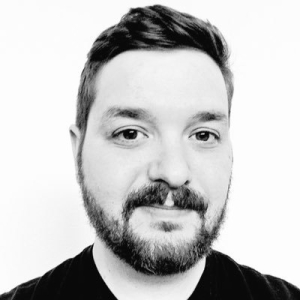 Nick has over a decade of experience in visual effects for film and television, working on such projects as AVATAR, SUPERGIRL, and THE WALKING DEAD. A graduate of the RIT School of Film & Animation and the American Film Institute Conservatory’s screenwriting program, he placed in the Top 50 in the Nicholl Fellowship competition and as a semi-finalist at the Austin Film Festival in both the Horror Feature and TV Comedy Pilot categories, as well as winning a Primetime Emmy for his visual effects work on Cinemax’s BANSHEE. Nick currently works as the Tracking Supervisor for Picture Shop, LLC.

A young woman betrothed to a wealthy businessman for the wrong reasons falls in love with a penniless engineer working at the 1939 New York World’s Fair.

Sex, drugs, and rock-and-roll among the lowest rung on Middleburg High's social ladder: the marching band.

When an ambitious Russian medical student is infected by a werewolf and begs for help from his mentor, Doctor Ivan Pavlov, he instead finds himself becoming a caged subject for the fame-starved doctor's brutal experiments

A fast-paced action series based on the true-life story of Grace O'Malley, 16th century Pirate Queen of Ireland. Winner of the 2016 Creative World Awards.

HOW TO DRAW SUPERHEROES