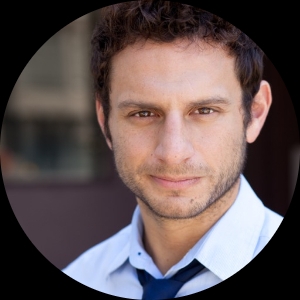 Nick is a writer, director and actor that was born and raised on Long Island. After graduating from The University of Delaware with a major in Visual Arts, he attended the conservatory acting program at the William Esper Studio in New York City, studying the work of Sanford Meisner.

Nick Psinakis & Kevin Ignatius are an independent creative team that writes, acts and directs film, television and music videos. Together, they established FOUR EIGHTEEN FILMS, a production company committed to conceptualizing and developing low-cost, high quality, independently produced films. Four Eighteen stems from the birthday they both share, April 18th. It took them over three years to realize this.

Nick and Kevin met while in New York City. In 2011, they wrote, acted and produced the short film The Adoption Agency in conjunction with FunnyOrDie starring Rex Lee (Entourage, Young & Hungry). In addition to garnering much attention on the website, the film opened the 2011 LA Comedy Shorts Film Festival. It went on to win the 2011 Christopher Wetzel Award for Independent Comedy and was an Official Selection for the 2011 Just For Laughs Comedy Festival in both Chicago and Montreal respectively.

In 2014, Nick and Kevin secured a deal with Legendary TV & Digital for their half-hour TV comedy series Life Behind Bars although the show never got made.

In 2016, they wrote and directed the sci-fi genre short films J and Hook Man. Hook Man won eight awards to date while J had its World Premiere at Omaha Film Festival sharing a film block with other short films starring Kristen Wiig and Oscar Issac most notably.