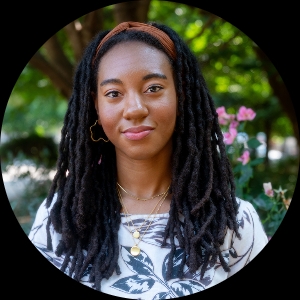 Natalie Jasmine Harris is a Black queer writer, director, and producer from Silver Spring, Maryland currently based in NYC. She received her BFA in Film and Television from NYU's Tisch School of the Arts in May 2020. Her NYU thesis film "Pure" received The 2020 Directors Guild of America's Student Film Award and recently finished a film festival run that included over 40 festival screenings worldwide. In February 2022, the short film was acquired by HBO and is now available to stream on HBOMax. Natalie is currently adapting the concept behind "Pure" into a feature-length film of the same name that is a 2021 recipient of The SFFILM Rainin Grant and was selected to be a part of last year's Gotham Project Market and Outfest Screenwriting Lab. She is currently a Creative Culture Fellow at The Jacob Burns Film Center and is in post-production for her very first commercial with Hyundai. Natalie’s work has been featured in publications that include Teen Vogue, THEM Magazine, The Cut, NBC, and The Baltimore Sun.