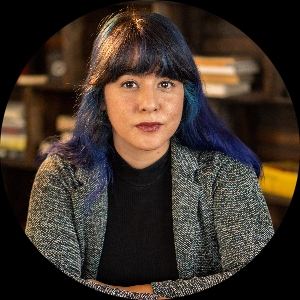 NATALIE RODRIGUEZ is an award-winning, Los Angeles based director, screenwriter, author, and mental health and anti-violence/trauma advocate. In 2014, she graduated from California State University, Fullerton with a Bachelor of Arts in Radio-Television-Film. Her first experiences in entertainment were an internship at the Conan O'Brien show and a position at Peter Guber's Mandalay Pictures, where she worked in the offices of producers, Matthew Rhodes ("Cherry," "Men in Black: International") and Academy Award-winner, Cathy Schulman ("Sharp Objects," "Crash").

Natalie has been a panelist at events hosted by organizations such as Google, Hispanicize, and YouTube, where she has shared her story as a female writer and filmmaker working in the entertainment industry. She has written for publications including the HuffPost Blog, Thrive Global, Anxiety Resource Center, NowThis News, Hello Giggles, and The Mighty.

In 2017, she founded Extraordinary Pictures, a production company focusing on films, television, digital series, and social issue projects ranging from diversity, mental health, and recovery. The company has produced short films, and feature films of different genres, including comedies and dramas. Natalie's first directorial feature films, "The Extraordinary Ordinary" and "Howard Original," which started as short films, screened at various film festivals. Both projects are, now, streaming on multiple streaming platforms, including Amazon Prime, Roku, and Tubi. "The Extraordinary Ordinary" is also available to subscribers of the products for public libraries (Access Video On Demand) and colleges & universities (Films On Demand). Ask your library for details. ."The Extraordinary Ordinary" is an independent drama about a college freshman who moves across the country to cope with her mental health, as well as a traumatic incident from high school while befriending a classmate and a co-worker who have a history of their own. The film won 'Best Film About Women's Empowerment' at the Glendale International Film Festival and scored nominations in the Best Director, Best Female Director, and Best Picture categories. The film also had a sold-out world premiere screening at the Los Angeles Diversity Film Festival (LADFF) and won 'Best Performance' by a leading actor. ."Howard Original" is a comedy-drama satire about the entertainment industry, where a washed-up screenwriter encounters multiple life crises when his pet cat comes to life. The film took home the 'Best Screenplay Adapted from Another Medium Form' at the Culver City Film Festival.

She was also an ambassador for Jen Zeano Designs (JZD), a clothing company in association with USA Networks. While Natalie continues to build her creative background, she is always open to collaborating with other artists and advocates. In-between productions, Natalie spends most of her time writing books and watching horror films. Her first young adult thriller book series, "Elephant," was published during the pandemic. The series is about four childhood best friends who uncover multiple family secrets. The books were also a finalist at Clare Books' the Binge-Watching Cure II contest for 'Best Novel.' The final installment of the series is set for publication in late 2022. In addition, she also adapted "The Extraordinary Ordinary" into a New Adult novel which will be available in eBook and paperback in spring 2022.

For details on previous and upcoming projects, be sure to check out her social media pages by visiting linktr.ee/extraordpictures