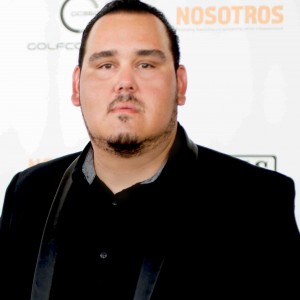 Momo Rodriguez started his comedy career in high school after reading a book called Latinos Anonymous, in which he later became the apprentice of the books author, Rick Najera.

Momo began as a writer, voice over and, red carpet interviewer, for LATV under Najera produced shows. Following his acting debut on Najera's Award winning Broadway Play "Latinologues". "Momo is a talented comedian and great friend, he is a joy to watch on stage" - Rick Najera.

During this time Momo also was an active open mic standup comedian. taking the bus from one gig to another, spending the night in bus stops in order to pay his dues as a Los Angeles comedian. After only 4 years of doing comedy in hollywoods competitive comedy rooms, Momo was given residence as one of the Legendary Hollywood Laugh Factory regulars, He eventually became a regular in all of the LA comedy clubs.

In 2010 Momo became a 2 season regular on the show LATINO 101 on SiTv and NuVO. He was then approached and signed by YouTube power house, Disney's Maker Studios. Momo was a Head writer for the Latino programing at Disney's Makers Studios and writer/actor for the show "La Chamba" a Maker original series.

In the fall of 2011 Momo was shooting a red carpet at a Golf tournament for actor Tony Plana's Foundation where he was honored to meet every one of his heroes such as Edward James Olmos and Cheech Marin. He was also ask to perform during the event opening for Comedian Carlos Mencia. After his

performance, Mencia offered Momo the position of his opening act for his national tour. Performing in comedy clubs, theaters, and arenas around the country.

In 2017 Momo was picked up by George Lopez to help on his HBO Comedy Special “The Wall” and Toured on both The Wall and The Comedy Get Down Tour with D.L Hughley, Cedric the Entertainer, and Eddie Griffin. It was Dream come true to be mentored by The Kings of Comedy.

In 2018 Momo Produced George Lopez’s Chingon Podcast and Wrote on his A&E Show “Very Superstitious”. Later that year Momo Was back on the road and Helping Produce George Lopez’s first Netflix Special for 2020.

Five Comedian friends accidentally become a fake Outlaw Motorcycle club, They need to keep the lie going in order to stay out of Jail or even death.