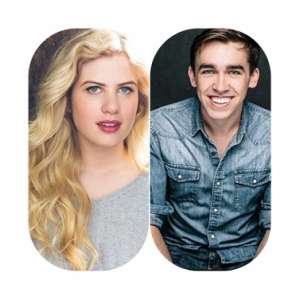 Sydney is a proud-ish graduate of NYU’s Tisch School of the Arts, where she earned a BFA in Drama and a minor in Entertainment Business. She recently worked on the Universal Studio’s project Marry Me as both an actor and an assistant. As an actor, she got to work with Jennifer Lopez. As an assistant, she never quite figured out Microsoft Excel. She is currently earning her Masters degree in screenwriting from Trinity College in Dublin.

Michael is also a graduate of NYU’s Tisch School of the Arts, where he earned a BFA in Drama and a minor in Psychology. He has recently acted in films Come As You Are, Killing Eleanor, and Deborah. Michael started his writing career in the era of Obama with a popular blog about chicken wings and has been chasing glory ever since.