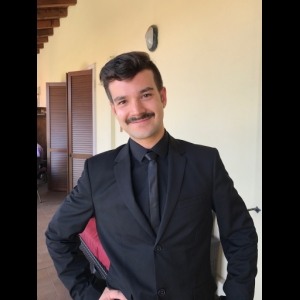 Matteo Mascanzoni is a queer genre writer from the romantic city of Verona, Italy. He has previously doubled as a Resort Entertainer, a Receptionist, a Call-Center Agent, and a Flight Attendant just so he could explore the world's wonders and get to live between the Great Barrier Reef, the Andes, and the eradicated Berlin Wall. Grateful to have gathered such varied experiences that he infuses in his storytelling, he leaped into the following chapter and moved to the land of dreams, Hollywood. He's now interning at a boutique management agency, Epicenter, and studying Producing and Screenwriting at UCLA to unlock the secrets of moviemaking. Meanwhile, he writes about actually solvable mysteries with the magical help of his diverse, international, mostly female characters. To cope with a strange form of nostalgia, he is currently developing a television adaptation of Dante Alighieri's The Divine Comedy, transforming the sacred Italian guilt trip into a hipster exploration of the human condition.