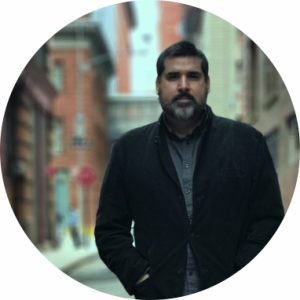 Luis (Lou) Ferrer is a writer/director whose most recent script, “Anywhere But Now,” recently advanced to the second round of the Austin Film Festival Screenwriting Competition, his third script to advance at Austin. The script is also Ferrer’s fifth to land on the Black List's "Top List.”

Ferrer spent thirteen years as a television executive at HBO and NBC in New York before leaving to pursue his long-held passion for film writing and directing. Ferrer is a decorated combat veteran of the war in Afghanistan where he served as a combat infantryman and reconnaissance scout with the Army’s 2nd Battalion, 35th Infantry Regiment’s Recon Scout/Sniper Platoon.

Ferrer studied at the American Film Institute, holds degrees from the University of California, Berkeley, and Georgetown Law, and will soon earn an MFA in Dramatic Writing from NYU's Tisch School of the Arts. He splits his time between New York and California where he lives with his wife Eden and two-year-old son, Jack.