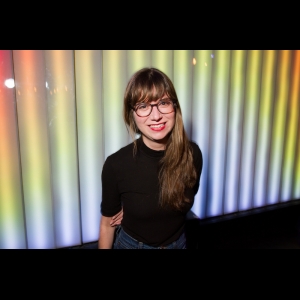 Lizzie Martinez is a Brooklyn-based stand-up comedian and writer. She performs all over NYC and has performed at venues like UCB, the Bell House, New York Comedy Club, and Union Hall, and on shows like Butterboy, Caroline’s Comedy Madness (3rd round finalist), Good Heroin, and Reductress Live, as well as on special showcases for Comedy Central and the Onion/AV Club.

She co-produces Starf*ckers, a monthly comedy show about astrology at Union Hall, and Savage, a weekly Monday show at Fawkner in Brooklyn, which was recently named one of the Best Alt-Comedy Shows in Brooklyn by Vulture and Splitsider. She co-created and stars in the web series #Throwback, which was named one of the 10 Best Comedy Web Series of 2016 by Paste Magazine, and is a contributing joke writer for Funny or Die.

She has performed at festivals throughout the country, including, most recently, Boston’s Women in Comedy Festival in 2019. She’s trained at iO Chicago, The Annoyance, and UCB.

Lizzie also has experience in the literary/theatre world, having worked for several years as the Director of Publications at Playscripts, Inc., a theatre publishing company in New York, where she read and edited hundreds of professional plays and scripts.