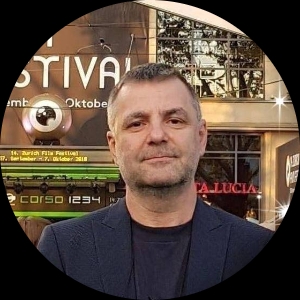 Laurentiu Rusescu graduated the Film Academy from Bucharest. He works as a film, TV, theatre director and as scriptwriter. He has produced and directed over 50 TV shows from entertainment to TV documentaries. He is the winner of the first script contest of HBO Romania "EPISODE 1 - with The Debt. In 2015 - 2016 wrote “Hackerville” - for HBO Romania. 6-episode miniseries for HBO Romania in co-production with TNT Germany. In 2019 he won a feature film development contest from CNC for "The Body".

In 1987 Romania, after being admitted to a psychiatric hospital for refusing to work with the Communist Security as informants, two lesbians lovers must escape the country to avoid sexual reconversion treatment.