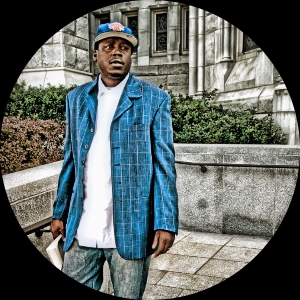 Noted for his artful, suspenseful stories telling, K’wan has become one of the best loved, most iconic black writers of the last two decades. He has penned pen over 2 dozen bestselling novels, including the widely popular “Animal” series, published by Cash Money Content/Atria as well as several paranormal stories written under a pseudonym. He has just over 1,000,000 books in print across formats.

K’wan has been featured in: Vibe, Pages, King, The Library Journal, Entertainment Weekly, The New York Press, and Time Magazine, to name a few. K'wan was also the recipient of the 2012 and 13 Street Lit Book Award Medals (SLBAM) in adult fiction for Eviction Notice and Animal. He has been a reoccurring guest on TV-One's Celebrity Crime Files.

K’wan currently resides in New Jersey where spends his time writing, cooking and binge-watching reruns of the Vampire Diaries with his teenage daughters.

FROM HARLEM WITH LOVE

Nothing says love like a bullet... Harlem had always lived by the code of the streets and respected the rules that governed them. But when his enemies break those rules and bring drama to his family, Harlem comes up with a plan to send them a very clear message: All is fair in love and war!