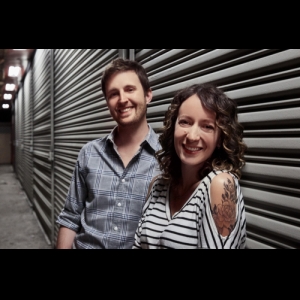 Katrina (bka Katie) and Tanner credit their partnership to the two-week period Katie dated his cousin Andy, the last guy she ever dated before coming out. Tanner is a former Sunset Strip performing guitarist and Katie is a motorcycle rider from the Pacific Northwest. They most recently staffed as ESEs on the upcoming Disney+ / Marvel Studios limited series HAWKEYE starring Jeremy Renner. They also wrote the made-for-TV movie CHRISTMAS EVER AFTER for Lifetime / MarVista Entertainment. Previously, Katie and Tanner were Executive Producers on VERSUS, a coming-of-age series for go90 / AwesomenessTV. Before that, they were staffed on Dan Fogelman’s PITCH, where they wrote and produced the penultimate episode, and were also hired to adapt the book IS THIS LEGAL? about the formation of the UFC. Additionally, Katie serves as Co-Chair of the WGA’s LGBTQ+ Writers Committee.

On August 12th, 1967, in Montana's Glacier National Park, the unthinkable happened: On the same night, nine miles apart, there were not one--but two--fatal grizzly bear attacks. "Grizzly Night" is the horrifying true story of the victims, the survivors, and the groups of strangers who banded together on that fateful summer night.