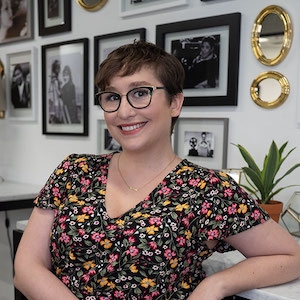 Kat Spada is a writer, storyteller, and L.A. native. After receiving her B.A. with a dual major in Literature and Film Studies, and a stint living in Sydney, Australia, she began her career working at Universal Pictures, Sony Pictures Animation, and Columbia Pictures. In 2008 she became one of the founding board members of the Claremont Colleges’ entertainment and media alumni network. Her shift into the nonprofit space led her to work as the Social Media Manager for the Greater Los Angeles Zoo Association and then the Communications Manager for Women In Film. Her social media work has been featured in The New York Times, Los Angeles Times, Boston Globe, Forbes, LAist, and more. As a digital marketing professional, she has received a PRism Award from the Public Relations Society of America, L.A. chapter, a Poppy Award from Visit California, and guest lectured at UCLA. Outside of work, she hosts the popular Beverly Hills 90210 podcast “The Blaze with Lizzie and Kat,” and has performed onstage at venues including the Upright Citizens Brigade, Flappers Comedy Club, the Hollywood Fringe Festival, and Comic Con. She writes essays for freelance publication on media, mental health, and more.

The mutated residents of Pripyat, who have grown up in the irradiated aftermath of the Chernobyl nuclear explosion, band together to audition for the Eurovision Song Contest. When a group of political heavies try to prevent them from revealing their existence to the world, the mutants fight to maintain independence and their right to access information by way of a free and open internet.