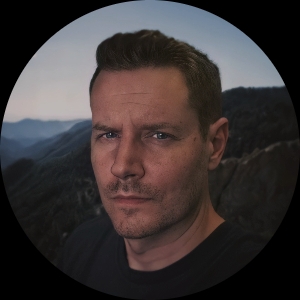 A writer and graphic artist, Justin is passionate about combining the wonderment of science with human drama to create compelling, high-concept stories and rich characters that feel real and relatable. He believes in the power of storytelling to transport and transform us, to create exciting worlds that make people laugh and cry, that push the boundaries of what cinema can do... to create tales that are gripping, thought-provoking, and smart.

Justin’s scripts have placed in several screenplay competitions. The pilot for his limited series Exponential ("Ephemeral") reached the Top 2% on Coverfly, was featured on The Red List, received six 8/10s on The Black List, was both Black List Recommended and selected as a Featured Script, and became a Final Draft Big Break Semifinalist.

A guilt-ridden physicist resurrects the hometown he destroyed decades ago within a massive, slowly collapsing time bubble, giving himself just 27 hours to save his wife and son from a nuclear disaster. DEVS meets CHERNOBYL.