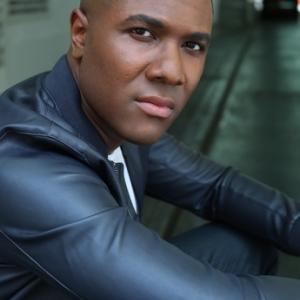 JUSTIN CARTER (Writer/Producer/Actor) credits writing with saving his life after watching most of the friends he grew up with end up either dead or in jail. Now he uses his unapologetic style to elevate his culture by inspiring other kids who grew up like him, so they see themselves reflected in his work and know that they exist.

He recurred on ABC’s “Life On Mars,” FOX’s “Gotham,” and the award winning Maker Studios digital series “Breaking & Entering” which he created, wrote, and produced. He graduated from Upright Citizen’s Brigade where he still writes and produces live shows.

Justin was named one of NBC’s Writers On The Verge. He's recently appeared on "The Daily Show" and he was a semi-finalist for Austin Film Festival and the Academy Nicholl Fellowship. His work was honored at the Hollyweb Film Festival, Pen International Festival, and he’s been named a finalist for PAGE International Festival, Blacklist MACRO x Warner Media Incubator, and Imagine x Netflix.

He is passionate about fighting for social justice and helping children who had similar difficult upbringings. He's proud to have served as a mentor in the IMentor program and assisted At Risk Youth in fostering life skills through positive long-lasting relationships. In Atlanta, he served as lead mentor for the UPS Mentoring Program. There, he created the AUC Community Day to bring children from underserved communities to local Historically Black Colleges and Universities to inspire them to strive to achieve their dreams. In New York, he went on to launch a community service program in Brooklyn, utilizing his original writings to teach Black History through artistic expression. Justin is proud of his work with the Fair Housing Justice Center fighting discrimination through the Acting For Justice Program to ensure everyone is lawfully afforded housing.

Justin was commissioned through a Department of Housing & Urban Development grant to write an Off-Broadway play about the Fair Housing Act and the devastating history of housing discrimination in this country. He recently adapted that into a screenplay which he sold and produced that is set for a 2022 release. Justin resides in New York City and North Hollywood. He is proud to serve on the International IMentor Alumni Council as well as the WGA Committee For Inclusion & Equity.

Fed up with getting excluded from the storybook Christmases depicted during the holidays, a street smart kid hijacks Santa's Sleigh to deliver Christmas to the Projects.

An aspiring artist combats her mental illness while rising through the ranks of New York City’s seedy illegal advertising underworld, blurring the lines between fine art and graffiti as well as genius and madness.