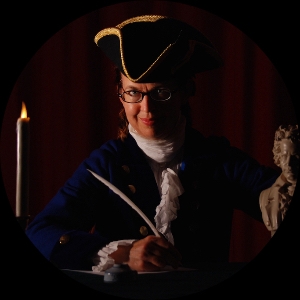 Specializing in historical action-adventures – from medieval Europe, the American Revolutionary and Civil Wars to World War II – Jürgen Vsych (pronounced Yurgen VY-zick) descends from five generations of combat photographers. Vsych made her first film at age 5. Her short, "Pay Your Rent, Beethoven" was made in Glasgow, won the Princes Trust Award, and was distributed with "Persuasion." Her 28th short, "$on for Sail" aired on Britain's Channel Four and on America's PBS. Jürgen apprenticed as a director at the Royal Shakespeare Company, The Old Vic, BBC-Scotland, The Old Globe, and Scottish Opera with Sir Jonathan Miller. She financed her early films by performing as a professional bagpiper for military funerals, and busking around the world. Jürgen is the author of "Captain Death," a novel about piracy on the eve of the American Revolution. She lives on a schooner, sailing the Seven Seas and the Hudson, Mississippi, Potomac, and Delaware. Jürgen’s favorite directors are John Huston, David Lean, Ingmar Bergman, Michael Curtiz, Akira Kurosawa, Buster Keaton, and Stanley Kramer. Favorite films include Lawrence of Arabia, Bridge on the River Kwai, Master and Commander, Tunes of Glory, The Third Man, The Maltese Falcon, The Snake Pit, Ridicule, La Grande Illusion, The Thin Man, The Adventures of Robin Hood, My Man Godfrey, Jaws, The Right Stuff, Seven Samurai, Last of the Mohicans, Gladiator, All That Jazz, and Casablanca.