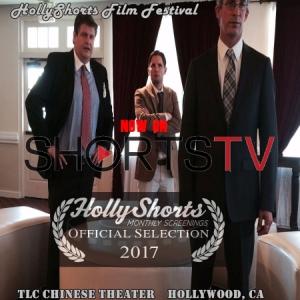 WGAw Writer/Director of Back Home Years Ago: The Real Casino for IFC, Warriors of the Discotheque for Fandor, and The Early Inauguration for ShortsTVUS!

There's more than one life... A successful businessman's daughter comes home from College for the summer, bringing back a book she's reading entitled 'Life After Life'. Just seeing his daughter's book, which he did a tedious report on, transports him back to his High School jock days as a top notch Football and Basketball player. His life was changed forever, however, when the school was devastated by the tragic loss of one of his best friends and teammates. Think The Blindside meets Heaven can Wait.

Hancock Hanover is a TV series one could think of as a financial 'Person of Interest'. Whereas, and instead of, modern surveillance technology used to forecast and protect citizens in harms way, the protagonists in Hancock Hanover seek to right financial wrongs: surreptitiously diverting sums of money from large financial institutions that were earned, or stolen, during the financial meltdown/ great recession due toethically questionable means, back to their unwitting victims. In addition, our heroes’ seek to utilize the judicial system to bring the most egregious offenders of financial malfeasance and skullduggery to justice. The series centers around Hawthorne ‘Thorn’ Hancock, a young handsome, athletic man, former star college football QB, who toiled for a short time in the NFL, and who happens to be the youngest son of the uber rich family that created the massive Wall Street investment bank, Hancock Hanover. Thorn is not without a few skeletons in the closet: his competitive nature extended beyond his athletic prowess and into his personal life in the form of a degenerate gambling problem. This led to him making bets on games he played in College at SCU, and as a result made him vulnerable to some very unsavory characters who were ‘mobbed up’. After an impressive career in college, and a few years in the NFL as a journeyman backup, Thorn had to come crawling back to the family business to support himself and pay off gambling debts. Little does Hancock know he’s stepping into a hornet’s nest as the Hancock and Hanover families are in a board room battle for control of the huge investment banking firm.