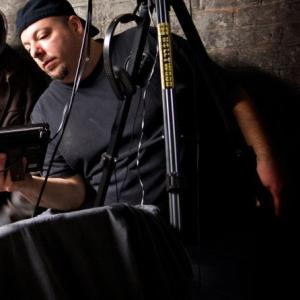 John Williams has spent close to 30 years gathering an expansive wealth of knowledge and experience in the fields of directing, editing, producing, writing and shooting both in-studio and out in the field. After graduating with a Bachelor’s degree in Communications & Filmmaking from Saint John’s University, John produced and edited long form shows for Fox, Travel Channel, HGTV, MTV, VH1, FOX, Trutv, Sundance TV and CMT. John has received multiple Telly awards for his editing on the Trutv series Disorder in the Court. The television industry isn’t John’s only creative outlet. John is also the writer/director of the internationally released independent feature film The Burningmoore Deaths and author of the novels “The Crimson and the Frost” and "Where Heaven Dies" currently available on Amazon. Career highlights include working with such celebrities as Bruce Willis, Adam Sandler, Metallica, Ozzy Osbourne, Kiss, Dick Clark and Britney Spears to name a few.

The Crimson and the Frost (novel)

A group of wide-eyed young Union raiders, with a romanticized vision of heroism, awaken to the terrifying realities of war as they sneak behind enemy lines, steal a locomotive and destroy a vital rail line that is the heart of the Confederate Civil War effort.

Based on the astonishing true story of Mary Louvestre, a former slave who risked everything to smuggle valuable information two hundred miles north and help change the course of the Civil War.