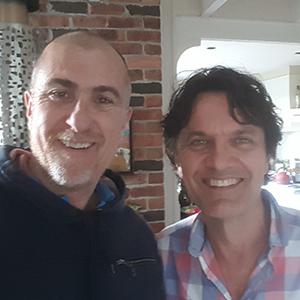 Mick won second prize in the 2010 Final Draft Big Break Competition with his action/comedy ‘Crims'. His short film 'Cabbie of the Year' (writer/director) won several awards, including Best Short Screenplay at the Australian AFI Awards and Best Screenplay at the St Kilda Film Festival. Another of his shorts, ‘Opportunity Knocks' (writer/director) won Best Short Film at the Sydney Film Festival Dendy Awards and Best Film at St Kilda. When he’s not writing screenplays, Mick is a commercials director. He likes movies, cooking, fishing, his kids and his wife - not necessarily in that order.

In 2014 John received a positive score in the Nicholl Awards, and made the second round of the Page Awards with the comedy The Stunt Double. After completing a degree in Film and Acting studies, he wrote and directed a number of short films and music videos, and played some small roles in film and TV. John was accepted into the TropNest Screenwriting program at Fox Studios, Sydney, where he finished the first of several feature scripts. He teaches screenwriting, and writes every day.