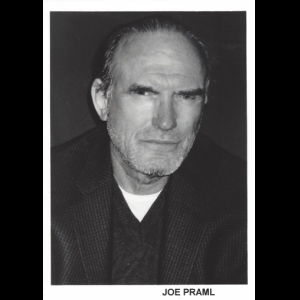 Joe Praml worked as an actor, playwright and stage director in both London, England and the US. He is a graduate of the University of Minnesota, with a Bachelor of Arts degree in English; and UofM Graduate School of Theatre. He was awarded the Sam S. Shubert Foundation Fellowship in Playwrighting at the University of Minnesota Graduate School of Theatre. Three of his one-acts won the McKnight Foundation Humanities Award for Drama. His stage plays have been produced in London and the US. He also wrote a weekly column on modern jazz.

Joe is a Long-service Member of British Equity, SAG-AFTRA, Dramatists Guild of America, the International James Joyce Foundation, and the Dylan Thomas Society.

Joe lived in London for 14 years working as an actor, writer, director and stage manager, mostly as an actor on the English stage, including the Edinburgh Festival, and theatrical tours of England, Scotland and Wales. He also acted in movies, and TV such as BBC-TV's Tinker, Tailor, Soldier, Spy and Smiley's People with Alec Guinness. He was a journalist for London’s Time Out magazine.

When Joe first came to Los Angeles from London he worked as an actor in TV and film including such movies as Fletch, and on TV such as Hardcastle and McCormick and Matlock.

Joe joined the original Celtic Arts Center on Hollywood Boulevard where he directed, compiled and read poetry of the Celtic canon and directed Equity-waiver plays including playwright Mary O'Malley's Once A Catholic for which he won the Drama-Logue Critics Award For Direction. He directed an Equity-waiver production of Eugene O’Neill’s early one-act sea plays, Bound East For Cardiff and The Long Voyage Home. The Center was awarded the Eugene O'Neill Centennial Memorial Commendation by the City of Los Angeles for honoring Eugene O'Neill's centenary, the only theatre in Los Angeles to do so. He directed Irish playwright Hugh Leonard's political black comedy, The Au Pair Man, at the Raven Playhouse in the North Hollywood Arts District as an Equity-waiver production which received excellent reviews.

For a time, Joe left the entertainment business and became a tenants' rights activist. He is on the Board of Directors of Coalition for Economic Survival, the leading tenants' rights organization in LA. He was a key person in the development of CES’ Tenants' Rights Legal Clinic, where tenants come for free legal advice. He is a former Rent Stabilization Commissioner for the City of West Hollywood.

During 2014, Joe compiled, created, read, and directed a one-hour radio program of the poetry of Seamus Heaney, the Irish poet and winner of the 1995 Nobel Prize in Literature. It aired on KPFK 90.7 FM Radio Los Angeles in August 2014.

A few years ago, Joe returned to the stage as reader of poetry and literature. Does annual readings of Dylan Thomas’ poetry and Under Milk Wood; Bloomsday readings from James Joyce’s Ulysses; Samuel Taylor Coleridge’s “Rime of the Ancient Mariner” and Oscar Wilde’s “The Ballad of Reading Gaol”; his adaptation of E.T.A. Hoffmann’s "The Nutcracker and The Mouse King". Joe now devotes his time to writing fiction and nonfiction, including his upcoming autobiographical novel, JFC!