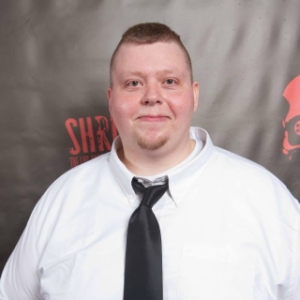 Jerron is co-writer of the produced original swing musical Big City and an award-winning screenwriter with a focus on horror and horror-comedy. He has written or co-written more than a dozen screenplays, both on spec and for an indie producer. Jerron has also been a script reader and film judge for Shriekfest Horror Film Festival and Midwest Horror Film Festival.

From an early age, Jerron has worked many different jobs--bus boy, comic shop clerk, pizza manager, liquor store clerk, big box retail sales, call center, human resources, and more!--all of which added material to his story-prone creative side. Even his hobbies fueled his future screenwriting. Reading comic books, playing Dungeons & Dragons, being on stage and behind the scenes in community theater--it's all grist for the story mill.

After studying telecommunications at Ball State University and film at University of Nevada Las Vegas, Jerron has proven that no amount of schooling is as helpful or insightful as a lifetime in the real world. He currently splits time between that silly real world and a world of monsters, blood, and horror.