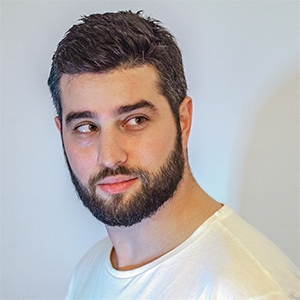 Filmmaker from Argentina. Since 2015, he's worked in development of national TV projects, as well as an uncredited script doctor for Argentinian TV.

In 2020, he made it to round 2 of the WB Writers' Workshop and co-created the argentinian TV show Mi Amigo Hormiga, which is available in streaming services in Latin America.

Anna is one of the greatest scientific minds in the world. She's also a dick. After witnessing a suicide on New Year's Eve, she will do everything in her power to solve that puzzle, an obsession that will cause her to break a few laws - including those of time and space.

On a normal Sunday morning, Eve wakes up next to her perfect boyfriend Trevor. However, as Trevor’s masquerade is compromised, Eve’s doubts about him soon turn into doubts about her relationship, her identity, and her entire reality. How can you escape when you don't even know you're a prisoner?