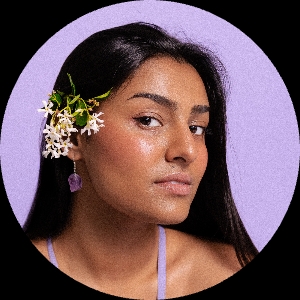 JASMINE SHARMA (she/her) is a South Asian-American actor/writer/activist based in Los Angeles. She aims to focus her work at the intersection of race, femininity, and Americanness. Bonus points if it’s community driven. And if we’re paying everybody.

Jasmine has also contributed to @iWeigh, and worked with the @24HourPlays, both as an actor and a writer. Sometimes, she Script PAs Broadway musicals. Jasmine a 2022-2023 Reel Sisters Fellow, and a member of The IAMA Emerging Playwrights Lab 2022-2023. Northwestern University. jasminesharma.org | @jasminesharmaa

Netflix is looking for their next big reality TV hit, and Surya will finally be getting her shit together in order to deliver. In the basement of a Hindu Samaj, Surya - and her Uma Auntie - audition an interracial couple for a potential new dating show, turning her recent heartbreak into a marketable pitch deck. Jasmine Sharma's new play, For Your Consideration, examines what happens when what you make is seen by everyone - including the person who inspired it.

A hate crime has taken place at a liberal University in America. Three women enter a research study planning to create positive change, but instead, uncover their complicated shared history. Jasmine Sharma's new play, Radial Gradient challenges what complicity looks like - what do we do if it looks like us?

It's us against them and us against us and us be in isolation. Between hours spent on Tiktok and Tumblr, college juniors demand accountability from the world and each other during the 2020 pandemic. Jasmine Sharma's new play, CANCELLED/CANCEL ME, are two acts in conversation about care.