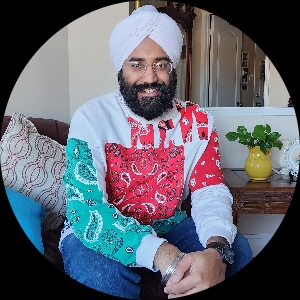 Jersey grown and raised, but now Toronto based, Jaskaran has been a screenwriter since he was fifteen, but it took twice that long for his parents to finally acknowledge him as such at family events. In the last five years, he's written, directed, and produced multiple short films, including:

"A TURBAN & A BEARD," a docu-drama highlighting Sikh hate crimes in America in the two decades since 9/11; "ME|HER," a South Asian romantic dramedy about two friends reconciling their feelings after ten years; and "COPELESS," a psychological drama about generational trauma, guilt, and grief.

Jaskaran's feature script "JERSEY BOY" was a Quarterfinalist in The Academy Nicholl Fellowships in Screenwriting 2022, made The CAPE List 2021 (curated by The Black List), and won the 2020 Whistler Film Festival's Power Pitch Competition.