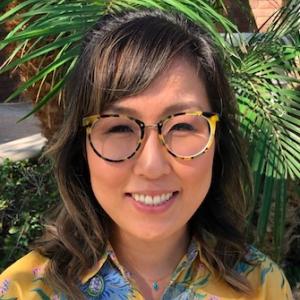 Jamie Park is an LA-based comedy writer (well, mostly dark comedy because she’s Korean so…shit gets dark). She studied sketch comedy and screenwriting at the Magnet Theatre in New York City, Second City in Hollywood and UCLA. Her first pilot, The (Strange, Prophetic and Super Fucking Timely) Revelation of Jennifer Kim, was a 2019 Imagine Impact finalist, clinched her a spot in the 2018 Blacklist/Women In Film’s Episodic Lab and won The Breakk’s 2018 screenplay contest. Earlier drafts placed as a semi-finalist at the 2018 Austin Film Festival, the Sundance You Tube New Voices Episodic Lab and the Fox Writer’s Lab.

Screenwriting is Jamie’s fourth career, after copywriter (Peggy Olson is her spirit animal), makeup artist (yeah, her immigrant parents were thrilled about that one) and elementary school teacher (please don’t make her go back). She’s not crazy nor rich—but she is Asian and ready to nuance the fuck out of the Asian-American on-screen story. She has performed stand up comedy twice and after nearly choking on her own vomit both times, was so over-the-moon proud of herself for showing up it’s insane. She regularly makes love to smart-ass dialogue, Shake Shack burgers and the Madewell sale section.

EYE OF THE TIGER KID

This quirky, dark comedy takes a surreal, absurdist look at what it’s like to be a Korean-American failure—specifically a Korean-American female failure. How does the tragic trifecta of being 30-something, unmarried and, by the end of the pilot, voluntarily unemployed complicate a post-millennial career switch for perpetual malcontent Jennifer Kim? Since she’s hilariously alienated and always in her head, we’ll see Jennifer’s perspective on this question literally come to life in moments of heightened reality ranging from her dad literally turning into a North Korean border fence in the middle of a conversation to suddenly being surrounded by a robotic crowd of Stepford-y Korean female teachers—all while she navigates the tricky waters of 30-something adulthood in suburban Southern California.