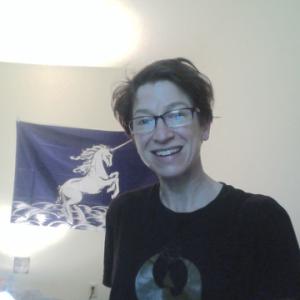 Ish Klein’s most recent book of poetry is called Consolation and Mirth. She is also the author of the poetry books, Union! and Moving Day. Some of the magazines that have published her work are: Fence Magazine, Gare du Nord, The Hat, Jubilat Magazine, Epiphany Magazine, Cambridge Literary Magazine and Nerve Lantern. Additionally, her poems are to be found in the upcoming anthology Explosive Magazine 1997-2007.

She is a founding member of the Connecticut River Valley Poets Theater (CRVPT) for which she has written the plays Drummer 41, In A Word, Faust and The Orchids.

Moe, wishes to be part of the movie industry. She knows this is possible because the film industry has many mentally divergent characters in it. Unfortunately, she is a failure because she has no friends. Fortunately, she reunites with former classmate, Larry, who happens to be working the job of her dreams at a prestigous movie theater. She must overcome herself to enter the strange world of the Hoffman Group.