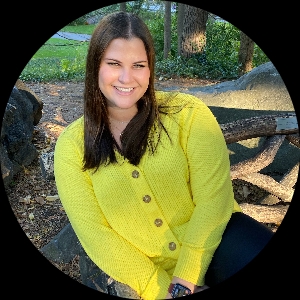 Hannah is an NYC-based award-winning television writer who graduated with a degree in Film & Television from Boston University in May 2020. She recently won The Great American Script Contest and the Top Short Film Festival for Best Television Pilot of the year and placed in Final Draft's Big Break Screenwriting Competition for her original pilot, “Currently Katie.” In February 2020, Hannah won the Big Apple Screenplay Competition for her first-ever comedic pilot, “Crowd Work.” Hannah started performing improv, stand-up, and sketch comedy as a teenager and has continued her love for entertainment in New York. Working at places including Comedy Central, The Ellen DeGeneres Show, and Hulu's new show "Only Murders in the Building," Hannah aspires to produce, write, and perform in an original comedic series. She is currently the Showrunner's Assistant on season 2 of the acclaimed comedy "Harlem." Recently, Hannah finished her role as the Showrunner's Assistant on the upcoming series "XO, Kitty," a spinoff of the Netflix franchise "To All the Boys I've Loved Before." Hannah has experience in television production, screenwriting, comedic performance, development, and talent assistance. For more information, please visit her website at www.hannahpetosa.com.

A low-level booking assistant on a late-night talk show favored by men gets the opportunity of a lifetime when the popular and somewhat controversial host gets fired. But, when she ends up behind the desk and in front of the cameras, she learns that late-night is harder than it looks.