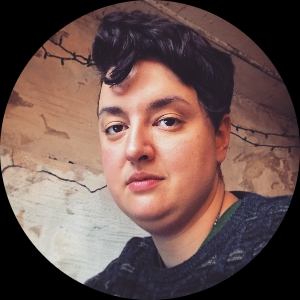 Halo Rossetti (they/them) is a writer, director, performer, and artist, worldbuilding positive futures in the husk of the capitalist experiment. As a queer and trans/nonbinary of immigrant experience with invisible disabilities, Rossetti's multi-hyphenate work in film, TV, video and performance explores what it means to be trapped inside of structures that are meant to help you. Rossetti envisions ways out by building worlds where marginalized people find more resources to fully thrive. Their work asks their audience to consider: how do we collectively find our way to a positive future?

Rossetti was one of seven inaugural 2021 Circle of Confusion Writers Discovery Fellows, mentored by Lawrence Mattis (The Matrix, The Walking Dead), with their TV pilot, "FLOAT." They are now represented by Lawrence Mattis, Zach Cox, and Casey Minella at Circle of Confusion as a writer/director. Rossetti's MFA thesis film, PONY, premiered at TRANSlations: Seattle Trans Film Fest, and was shown at LesFlicks LFest 2022, San Francisco Frozen Film Festival 2022, and Amsterdam Lift-Off Film Festival 2022. The feature script for "PONY" advance to the second round of Sundance Institute's 2022 Development Track, and was in the top 10% of Academy Nicholls Fellowship 2022 submissions. Rossetti was Temple University's nominee for the Tribeca Film Institute/Sloan Discovery Student Award 2020 with their TV pilot, “WELL.”

When a new trans-inclusive text-based queer dating app, Licks, based on the text-based classifieds in the ‘80s lesbian magazine "On Our Backs" magazine, sweeps the queer and trans dating scene of New York City, an elder punk transwoman, haunted by memories of her youth, decides to keep up with her younger queer and trans friends by joining the app.

In an alternate 1980s New York City, a genderqueer drug dealer contracts a disease that cancels their gravity-field, which they spread sexually to their community before coming up with a way to handle it.