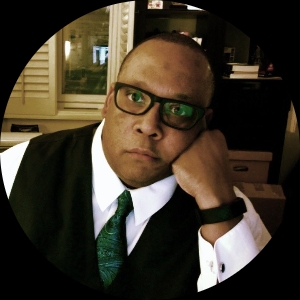 Gregory Earls is a graduate of Norfolk State University, one of the nation's Historically Black Colleges and Universities. He went on to attend the prestigious American Film Institute as a Cinematography Fellow. Currently, a manager with 20th Century Studios, Earls coordinated the post-production on numerous feature films, including: “The Longest Ride,” “Logan,” and “The Hate U Give.”

Earls’ novel, “Empire of Light,” is an Urban Fiction novel about a black cinematography student’s quest-fueled and action-packed European trek to study the genius of Caravaggio. He's written a feature script based on the book, and he believes this version surpasses the novel in every way.

A Cleveland, Ohio native, during football season Greg can be found at a Browns bar in Hollywood, the St. Felix, where he roots for the greatest football team in the history of Cleveland. Steadfastly butchering the Italian language for the last decade, he hopes to someday master the language just enough to inform his mother-in-law just how much he loves her daughter, Stefania, who was born and raised in Milan, Italy.