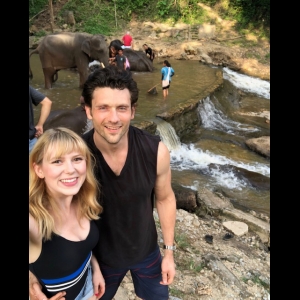 Greg Scharpf is a screenwriter living in New York City currently represented by law firm HJTH. He got his start when his original screenplay ONE FELL SWOOP was selected to The Black List and was optioned by Lost City Inc. and Wonderland Sound and Vision where he worked with producers Mason Novick, Elizabeth Grave and Mary Viola.

Before that Greg worked as the assistant to Sarah Jessica Parker and Matthew Broderick for six years, where in the tradition of Michael Arndt before him, he read scripts and wrote coverage among many other much more banal tasks, all the while honing his craft.

Greg was born near Pittsburgh, PA in a blue collar, football obsessed small town he equates to Dillon, TX from FRIDAY NIGHT LIGHTS where he fancied himself as a less cool version of Tim Riggins. He graduated from Penn State University with an English major and Film Studies minor, he also plays the drums and considers himself incredibly fortunate to wear the hat of unofficial recipe tester for his chef fiance's amazing culinary creations.