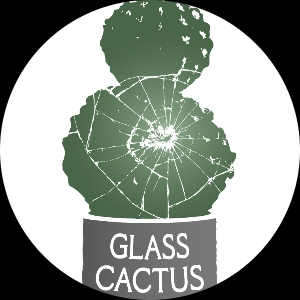 Glass Cactus is the screenwriting and film production team of Amanda E.K. and Jesse Livingston. In 2020 they shot and released their first short film — Second Surface — a 12 minute black & white silent film about a woman who follows her mysterious twin into a strange and surreal world and experiences changes in identity as she travels, the way we often do in dreams. The film was an official selection at the 2020 IndieX Film Fest, where it was nominated for Best Experimental Short and Best Mobile Short. It can be seen at amandaekwriter.com/glass-cactus

In 2021 Amanda began releasing a series of short films called The Pandemic in Pollyville, chronicling stories from the pandemic in silent film style and featuring vintage Polly Pockets. The films are released weekly on YouTube.

Jesse is a Denver native. His fiction has been featured in Pseudopod, The Drabblecast, Suspect Press, and Speculative City. In 2018 Jesse wrote and directed The Blue Room, a short, surreal horror film in the tradition of David Lynch and John Carpenter. The film tells the story of a security guard in a mysterious research facility whose only respite from the long nights of crushing boredom are his conversations with a scientist who claims he can do magic. The Blue Room can be seen at thefarstairs.com/jesse-livingston

Amanda is a queer writer, filmmaker, and creative coach, and the former editor-in-chief of Denver’s Suspect Press — an art & literature magazine and indie book publisher. She writes about sex and relationships for Playlove and OFM, and she’s pitching a memoir about growing up in fundamentalist purity culture and the impact of religious trauma. Amanda’s work has been featured multiple times on the Low Orbit podcast and on Mortified Live. She’s spoken at Lighthouse Writers Workshop as a queer creative, and she’s been published in Jersey Devil Press, Monologging, Green Briar Review, South Broadway Ghost Society, Suspect Press, and others.